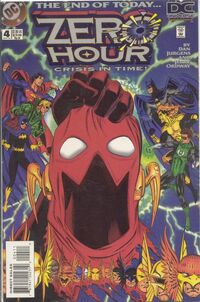 Zero Hour: Crisis in Time was a five-issue limited series published in 1994 and written by Dan Jurgens. The series defied traditional publishing convention by releasing each issue in the reverse order of the standard numbering system. In keeping with the countdown motif supplied by the story's theme, the series was intended to be read beginning with issue #4, then #3, #2, #1 and finally the end-cap 0 issue. Following the mini-series, October of 1994 became informally known as Zero Month. As such, each ongoing DC title published at that time released a special zero issue in place of their standard sequentially numbered issue. Following Zero Month, the titles resumed their regular numbering system. As a result of Zero Hour, the continuity of the 30th century Legion of Super-Heroes suffered a complete reboot, similar to what many 20th century characters experienced after the 1985-86 maxi-series, Crisis on Infinite Earths. The entire limited series, including the zero issue was collected in the Zero Hour trade paperback.

Retrieved from "https://dc.fandom.com/wiki/Zero_Hour:_Crisis_in_Time_Vol_1?oldid=2545978"
Community content is available under CC-BY-SA unless otherwise noted.