Zoom was the second speedster to call himself the Reverse-Flash, acting as the arch-nemesis to Wally West. Taking his name and colors from Professor Zoom, a time-traveler who attempted to destroy everything the Flash has ever stood for through murder and deceit, Zoom tried to inflict a life of tragedies on Wally West to make him a better hero. In the New 52, with Daniel West becoming the Reverse-Flash, Eobard Thawne takes on the mantle of Zoom instead, referred rarely to as "Professor Zoom". Hunter Zolomon was created by Geoff Johns and Scott Kolins, first appearing in The Flash Secret Files and Origins #3 (2001). 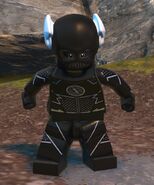